After much reading and hyping myself so much, I was pretty stunned by the early notification on my phone that yesterday night could potentially be a good evening with good seeing. So I went home after work (with my phone still showing 80% of potential seeing), sat on my desk and prepared myself. I chose to watch the Moon, since I never really observed it, Jupiter, Saturn and search for the Sombrero Galaxy!

Last week I searched for a few good atlases and stumbled unto the Interstellarum Deep Sky Atlas. A promising atlas which should arrive this week, but still would let me be without a field atlas, since it is a desk edition... After cramming in the forums I mainly found three downloadable recommendations:
1) The Deep-Sky Atlas
2) Deep-Sky Hunter Atlas
3) TriAtlas
I downloaded all of them and browsed through them, noticing that only the Deep-Sky Hunter Atlas exists in a field edition. I printed the normal Version on A3 paper to look if it fits the need and, hell yeah, I really like it so far!! Only downside (for me) at the moment, is that the constellations are in black lines in contrary to the Deep-Sky Atlas. So I think I'll print both of them, laminate them and take them with me on my sessions. (I will have to inverse the colors on the Deep-Sky Atlas though)

To round everything up, I figured that I'll need a software too, to plan my sessions a little better and just give me the right impressions on where I will have to search in the sky. A while back I downloaded Stellarum, which seemed to be a great free app, but it simply kept crashing on my laptop... Searching for alternatives I found SkySafari 5 and Starry Night 7. Given the prices of Starry Night 7 and the fact that it isn't to be found on the AppStore, I went ahead and downloaded SkySafari 5 Pro. It is a beautifully simple app which does the job just fine and gives me the needed input to satisfy my thirst for knowledge (at least for now). At this point, I was wondering if someone knows if Starry Night 7 was up-gradable? So let's say I buy the Enthusiast Edition and wanted to up-grade to the Pro or even Pro-Plus version one day. Do I have to buy the App entirely new or does it give the opportunity to up-grade for a few bucks to the next edition?

Enough rambling an off to my stargazing site!

I arrived well early before sunset, which gave me the opportunity to once check again, if my finderscope was well aligned with the 'scope. It also gave me the chance to let my 'scope acclimatize the same way as last time and so I sat back and waited a little until the moon gained a little on contrast as the sun was setting.

The Moon, being a waxing gibbous, shone bright in the slightly dark blue night sky with literally NO clouds in the sky. I put my 15mm BTS eyepiece in and looked at the beautiful moonscape. It is defiantly the first time I've seen the Moon so up-close and I was in awe by it. I never imagined that it could be so nice to look at all these craters and I began to wonder where they all came from. It is simply a battlefield of craters and each and everyone has its own story to tell... after a good 30 minutes of switching between the 8mm and 15mm eyepiece and lots of "ohs" and "wows", I figured I could try and photograph the Moon with my phone through the eyepiece... what seemed to be a really stupid idea at first turned out to be a really great shot (I think?)! (very little photoshop-magic to increase contrast and sharpness) 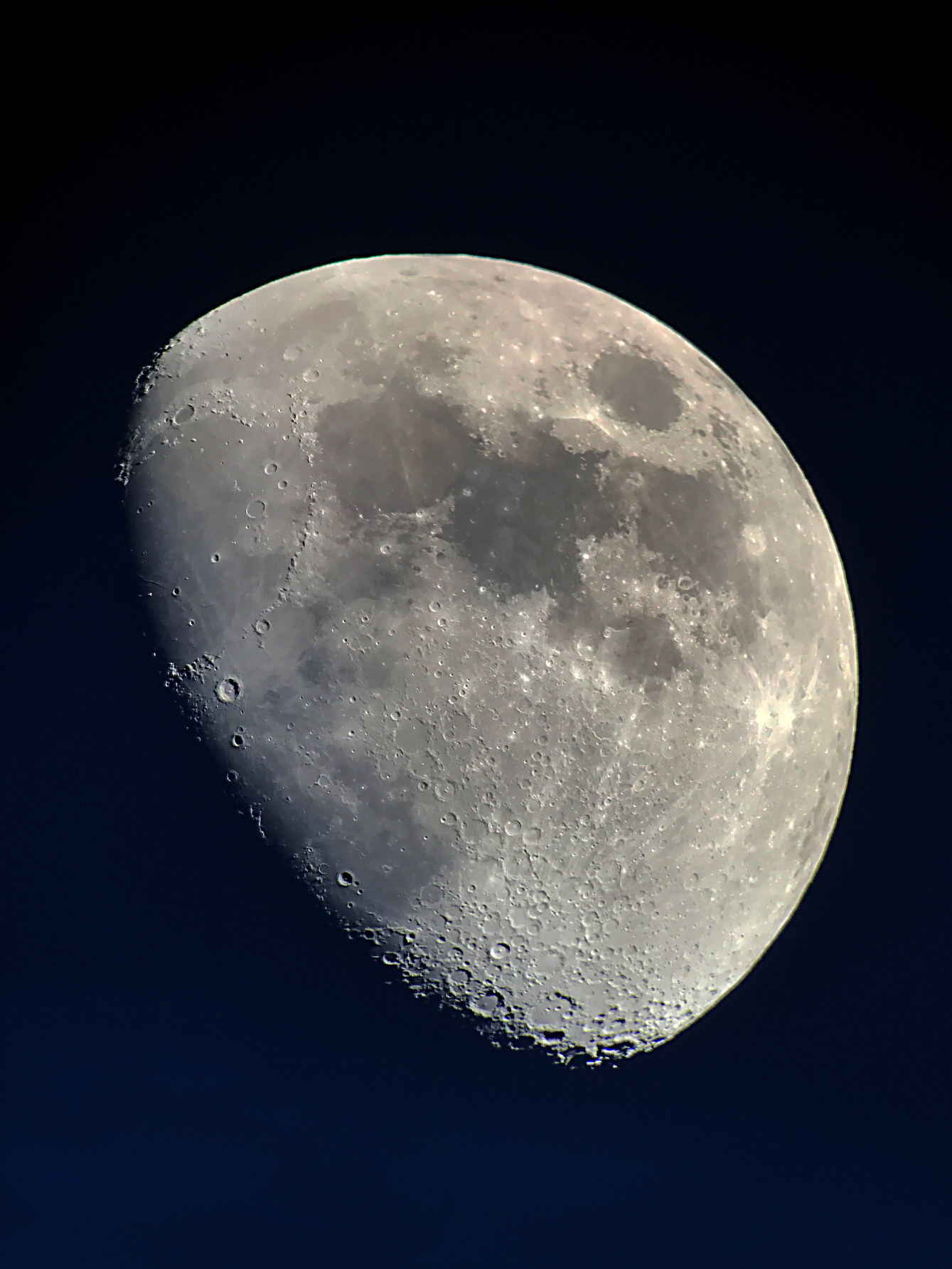 Next on that nights list was Jupiter. I remembered the image last time I looked at it and I was thrilled to already clearly identify Europa from Io through the finderscope. I managed to see Callisto, Ganymede, Europa and Io. I think that Jupiter itself was a little less contrasty as last time BUT I think I could make out the Red Spot which really made me happy! I was so thrilled by the view I even can't write down how I felt...

I switched from 15mm to the 8mm eyepiece and focused in... I kept focusing and focusing and focusing but nothing happened... As I looked up in the sky I was shocked... the beautiful cloudless sky had turned into a thick carpet of Cumulus Cumulonimbus... I immediately looked at the horizon on my right to see if there was a slight possibility of clear sky but the enemy had invaded the sky... To make matters even worse at that moment, I met my locations' neighbor, which is no other company then Arcelor Mittal... The sky with the clouds lit up in a bright orange from the molten metal... At that moment I knew it was over for that night...