So, I crammed all of my new acquired stuff together and went to the darkest place I could find near my town. It's a mere 5 minute drive from my home. As I set everything up, I tried to wait for 20-30 minutes to give the 'scope a chance to acclimatize but I really couldn't! 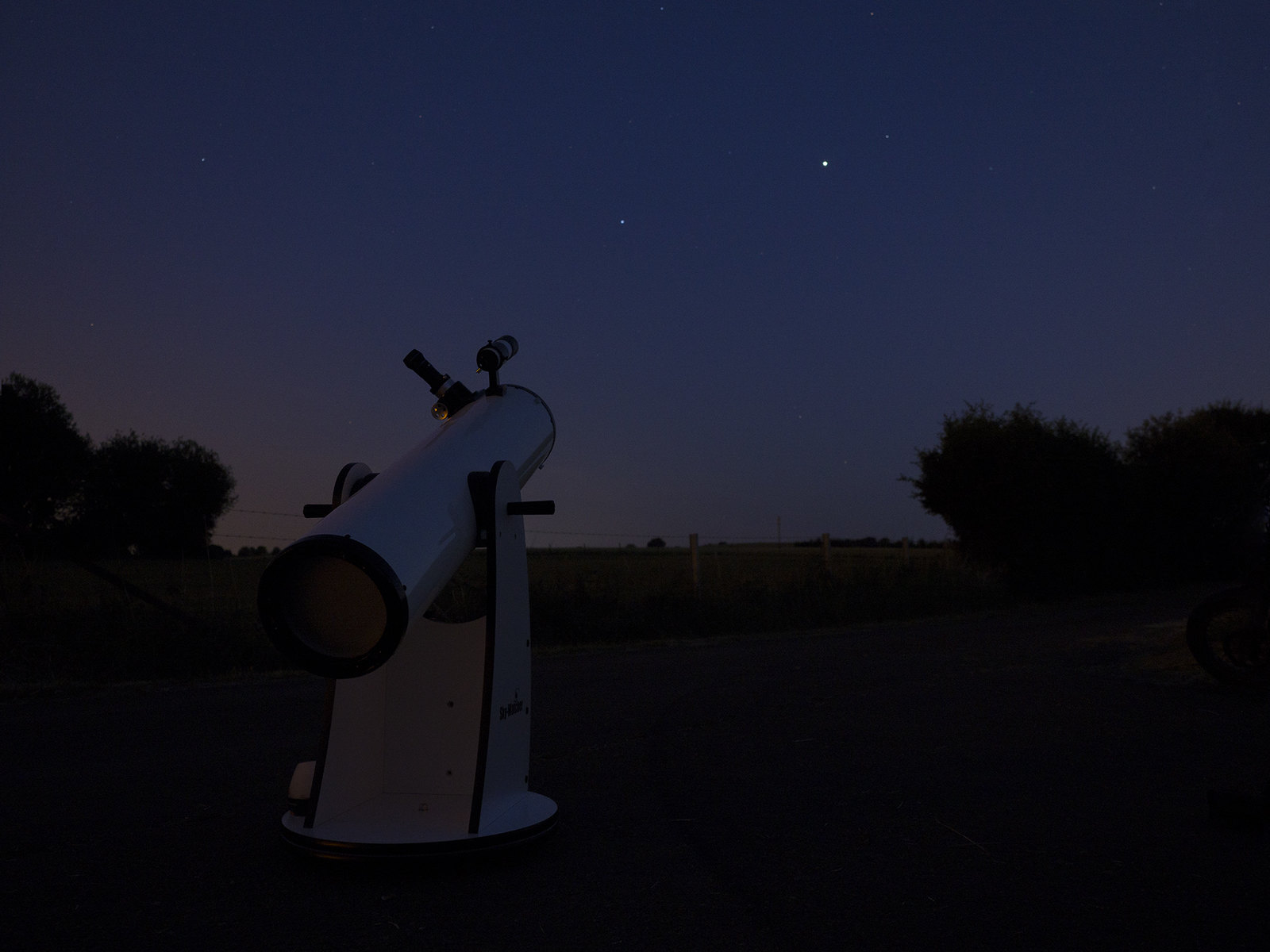 I looked west south west to find Jupiter, pointed my finderscope at it and I was amazed by how clear the image from the 'scope was!! I had a 5 minute stare through my 25mm BST eyepiece where I could distinctly see the two belts, the north and south equatorial belt. As clearly as the belts were also three of its moons were, namely Callisto, Europa and Io, although Europa was quite close to Jupiter. The color was also great and the view, simply mesmerizing!

I then switched to the 15mm BST eyepiece. First I was a little, let's say disappointed, but not that strong, by the magnification, and immediatly switched to the 8mm BST. To my surprise I wasn't convinced by the view either... So I decided to get back to the 25mm and calm down and enjoy the view as I clearly was getting hasty.

As I started over, I remembered some words from a friend of mine who told me that watching the stars often comes down to 50% of actually seeing the stars and 50% imagination and concentration. So I tried the 15mm a second time and... I was hooked. I could now clearly see eight different colors and belts! I'm not quite sure what it was I saw, except the north and south equatorial belt, but I will have a look at some Jupiter maps and educate myself about the planet's surface. This will help in better understanding and watching next time, the case given that the seeing is as clear as it was that night. With the 15mm eyepiece Europa was now very distinct from Jupiter. I couldn't manage to get more detail out of the 8mm eyepiece, everything just got a tad bigger and a little fainter if my impressions were right.

After good half an hour of watching the delightful planet and its moons I sat down and searched for Saturn, which was south not very high above the horizon.

I switched back to the 25mm eyepiece, pointed my viewfinder at Saturn and peaked through the eyepiece. What a marvel!

I clearly could see some colors on the surface and easily distinct the ring from the planet itself. As I switched over to the 15mm eyepiece, the separations on the planet's surface became a tad clearer and the ring/planet separation obviously bigger. I encountered the same problem as before of not knowing what I was looking at, which bothered me a little. I have to do a little homework here and get myself started with some fancy vocabulary.

All in all it was a marvelous first light experience and I clearly have to learn the stuff I'm looking at, but I think that's just me and my endless thirst for knowing things. I randomly gazed through the skies at the end, beeing absolutely overwhelmed by everything I saw. Furthermore, I simply was flabbergasted when I ran across the milky way in the north east... There were so many stars I couldn't see with my bare eye, but only with the 'scope (which made aiming with the finderscope a nightmare... How do you guys do that really?!).

I'm glad I acquired the Skywatcher Skyliner 200P with the eyepieces. It is one of the best things I got myself and I think I will have a lot of fun with it and furthermore learn so many new things.